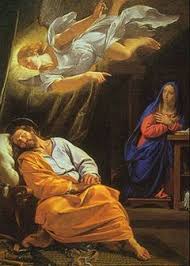 Vigil of the Nativity.


When as his mother Mary was espoused to Joseph, before they came together, she was found with child, of the Holy Ghost. And so on...

Why was the Lord conceived of an espoused virgin rather than of a free? First, for the sake of the genealogy of Mary, which we have obtained by that of Joseph. Secondly, because she was thus saved from being stoned by the Jews as an adulteress. Thirdly, that Himself and His mother might have a guardian on their journey into Egypt. To these, Ignatius, the martyr of Antioch, has added a fourth reason namely, that the birth might take place unknown to the devil, who would naturally suppose that Mary had conceived by Joseph.
Before they came together, she was found with child of the Holy Ghost. She was found, that is, by Joseph, but by no one else. He had already almost an husband's privilege to know all that concerned her. Before they came together. This doth not imply that they ever did come together the Scripture merely showeth the absolute fact that up to this time they had not done so.
Then Joseph her husband, being a just man, and not willing to make her a public example, was minded to put her away privily. If any man be joined to a fornicatress they become one body; and according to the law they that are privy to a crime are thereby guilty. How then can it be that Joseph is described as a just man, at the very time he was compounding the criminality of his espoused? It must have been that he knew her to be pure, and yet understood not the mystery of her pregnancy, but, while he wondered at that which had happened, was willing to hold his peace. -

Posts have been few and far between, for various reasons, non more than, by the time night falls, so am I. Any thoughts or ideas I had at 9:00 am or 2:00 pm are long gone, so another evening slips by. I've tried and have been quite frankly fairly successful in letting my anger go (most of the time) concerning Rome, our so-called Pope, Bishops, Cardinals and the like. Liberals and modernists are useless to me. The media I try to ignore as much as possible. In the end, all of the mentioned above, in any order you like, are all distractions that just take away my inner eye that should be focused on God and my salvation. And when I say 'my salvation' I don't me just me in a selfish sort of way; no, I'm taking about the big pictures: wife, children, family and friends. The souls in purgatory. The Pope, priests. The list can go on and on, and some days it does. One great consolation is this beautiful time of year, as we wait in holy expectation for our Lord. Advent. Joy that comes from deep inside, almost like we are ourselves are giving birth to Him who can only come from the Blessed Virgin. Even on the coldest of December nights the thought of the Manger or the trip by donkey to Bethlehem, or the shepherds in the field will always bring a warmth respite from the darkness of these days.

Sacred Heart of Jesus, have mercy on us.

Immaculate heart of Mary, pray for us.

St. Joseph, watch over us. 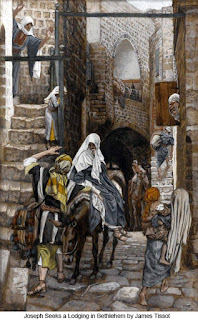