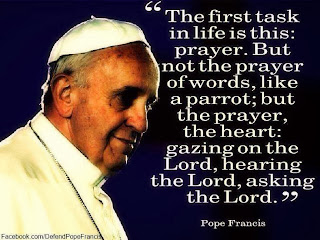 When I saw and read this image on Facebook, I asked myself; What about the Rosary?  Not any of the dozens of other questions that came to my mind afterward, but just this, what about our Mother's Rosary. I am still trying to hang on to all the positive sentiments (for lack of a better word) that as a Catholic man I should have for the Pope.  But for me, it is hard.  Not to get into the categorizing mode of 'what kind of a catholic are you,' I will say that I am, as they say, (or I say), an old school traditional Catholic.  I have been blessed to be able to go to only the Latin Mass, (Ecclesia  Dei, SSPX) except on Thursday mornings when I attend a Novus Ordo Mass with my parents.  It's nice meeting them there and going to Mass with them, something I've never done until this past spring.  In these times we must show ourselves through love and charity, and so I do what I must do.  But when I'm there I pray for our Holy Mother Church, that by some Hand of God she comes to Her senses and realizes the error filled road that she is on.  I'm sorry, but I can't help but see the situation this way.  I will not go on about Vat.II.  Enough has been said about that time in church history by men and women 100 times more gifted than me.  I am not a good apologist.  I don't go off looking for more crosses to bear by way of looking for or being argumentative.  But my inner anger was roused when week after week I read or hear of something Pope Francis has said that, to me smacks against the side of what the Church was and still is; a bastion of Truth and Strength in this modern world.  A Church that knows the difference between right and wrong, good and bad, justice and injustice.  It seems to me that Pope Francis, in his zeal to reach out to all people is leaving behind the flock that is his to tend.  Why must he leave behind all that the Church has always been, the Traditions and Dogmas that has helped the Church to be the rock that she is for over 2000 years?  We all know that the first task in this life is prayer, to praise God.  But not the prayer of words?  Then what, contemplative prayer for all mankind?  Many people are not made for that kind of prayer, many know only the Rosary, really.  Many will read this and say, what does he mean, should I give up my Rosary?  I know this line of reasoning sounds absurd but this is the following of the thread Pope Francis gives us.


As everyone knows lack of faith in Christ's teaching is widespread in the world.  This constitutes a double danger for men.  It is dangerous for the unbelievers themselves because they run the risk of losing God.  It is dangerous even for those who have the faith because unbelievers fight against the faith.  Believers, especially if they are not too well educated or instructed in the truths of the faith, run the risk of losing their faith in the face of the bad example, false arguments or persecutions with which unbelievers attack the faith.  (from) My Way of Life, the Summa Simplified for Everyone, 1952

ST. Thomas saw the errors that could attack the Church even then.  Times have not changed much, only now we know we have a true Modernist for a Pope.  Modernism, liberalism, naturalism, all dangers that past Popes have warned us of, now perhaps embraced by our Holy Father in his quest for ecumenism.  I am left with only my prayers, contemplative and, if I want, chattering like a parrot.  The Holy Mass of the Ages and the Rosary of our Blessed Mother was good enough for many Saints and just good Catholics, I know these Gifts from Heaven will be good enough for me.

The Pope and the President

I have no way to even begin to comment on this article.  I know our President is pro everything, but to hear him talk about life in such a haphazard is chilling.  Combining Pope Francis' remarks along with our Presidents in one article is something I thought I'd never read.
But there it is.

WASHINGTON (Reuters) - President Barack Obama on Wednesday welcomed Pope Francis' recent remarks that the Catholic Church must shake off an obsession with teachings on abortion, contraception and homosexuals, saying the pontiff was showing incredible humility.
"I tell you, I have been hugely impressed with the pope's pronouncements," Obama said in a CNBC interview.
Obama has worked to expand gay rights as president and last year backed same-sex marriage. He also supports the use of contraception and a woman's right to an abortion.
Pope Francis told the Italian Jesuit Journal last month that the Church had "locked itself up in small things" by its obsession with abortion, contraception and homosexuality.
Obama said the pope seemed to be someone who "lives out the teachings of Christ" and shows "incredible humility" toward the poor.
"That's a quality I admire," said Obama, who has yet to meet the new pope.
Posted by kam at 7:44 PM 1 comment:


I wanted to post this just how I read it this morning, from my Breviary, on this, Oct 2, The Feast of The Holy Guardian Angels.


Reading 3
From the Sermons of St Bernard, Abbat of Clairvaux.
On Ps. xc
He hath given His Angels charge over thee. A wonderful graciousness, and a wonderful outpouring of love. For who hath given charge? And what charge? Unto whom? And over whom? Let us carefully consider, my brethren, let us carefully hold in mind this great charge. For who hath given this charge? To Whom belong the Angels? Whose commandments do they obey, and Whose will do they do? He hath given His Angels charge over thee, to keep thee in all thy ways, and that not carelessly, for they shall bear thee up in their hands. The Highest Majesty, therefore, hath given charge unto Angels, even His Angels. Unto these beings so excellently exalted, so blessed, so near to Himself, even as His own household, unto these hath He given charge over thee. Who art thou? What is man, that Thou art mindful of him? or the son of man, that Thou visitest him? Ps. viii. 5. Even as though man were not rottenness, and the son of man, a worm. (Job. xxv. 6.) But what charge hath He given them over thee? To keep thee in all thy ways.
V. But thou, O Lord, have mercy upon us.
R. Thanks be to God.